I’m sure this is old and has been sent round before, but, its still good for a chuckle. Would be better if it was Peter Costello wearing that t-shirt. That’d be a pretty good photoshop challenge I reckon. 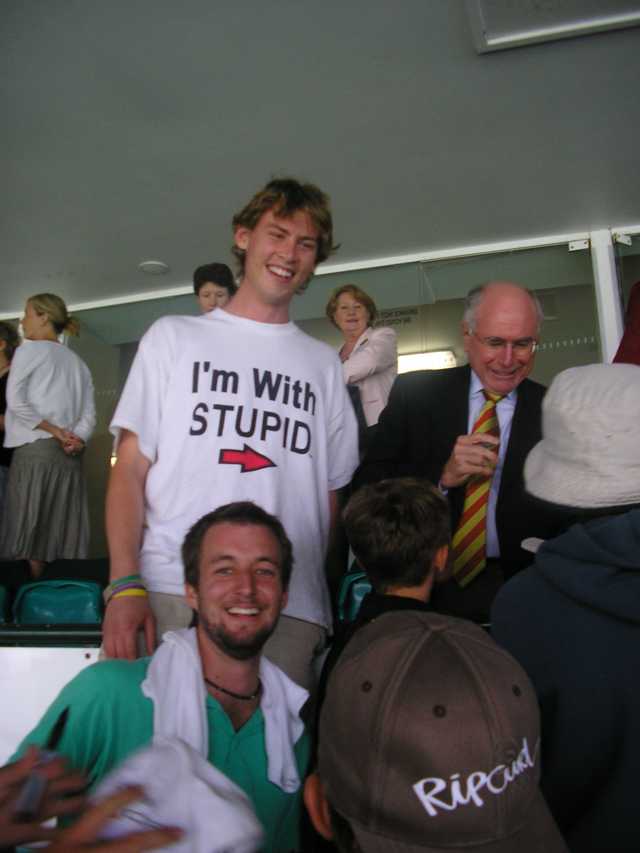 Looks like America’s Finest News Sources, The Onion has put their entire archive online for free (this was previously a paid premium service). Awesome!

May you have a happy No Pants Day today.

Richie, Magda and Richardo are Ubercoolische!

Over at Maddox’s “Best Page in the Universe“, he has some great observations on a couple types of nerds, with my favourite being the “I wish I was Japanese” anime nerd.

Everyone knows someone like this. They refer to themselves as “otaku” and they embrace everything Japanese, not necessarily because it’s something unique or interesting, but because it’s Japanese. They wear clothing with Japanese or Chinese characters on it that translate to English phrases like “good will” or “long life.” They wouldn’t be able to get away with wearing a shirt that said “long life” in English because it would just look stupid, but as soon as it’s translated into kanji it suddenly becomes cool and mysterious? Please.

I have great memories of cicadas from when I was a kid. Green grocers, brown bakers, black tigers. Some were more difficult to find than others. Today I was looking at the Cicadaville site, and it had some facts I didn’t know.

Thanks to Tony for sending that on. Not sure of the original source.

A group of pilled up youths attacked police in Killara today after a day of designer drugs and Stoli vodka.

One policeman was knocked unconscious by an Honours degree from Sydney Uni hurled by a young 25 year old graduate working at his dad mate’s consultancy firm.

Police said, “these boys should know better then to throw their possessions at us. They are educated, have every chance in life and we’ve never done anything to hurt them.”

The riot was sparked when neighbours complained of loud sexy house music pounding from the backyard of the party host. Police attended the scene and things got worse from there.

Police were considering making arrests but were instructed to drop the case after one of the boy’s fathers offered to donate money to build a new gym at police HQ.

Thanks to Jaime for that ðŸ˜†

I know the counsellor said we shouldn’t contact each other during our “cooling off” period, but I couldn’t wait any more. The day you left, I swore I’d never talk to you again. But that was just the wounded little boy in me talking. Still, I never wanted to be the first one to make contact. In my fantasies, it was always you who would come crawling back to me. I guess my pride needed that. But now I see that my pride’s cost me a lot of things. I’m tired of pretending I don’t miss you. I don’t care about looking bad any more. I don’t care who makes the first move as long as one of us does. END_OF_DOCUMENT_TOKEN_TO_BE_REPLACED

Don’t forget ye scurrvy dog that this Friday September 19th be “Talk Like a Pirate Day”. If you need help, you can polish up on your pirate vocabulary or get your sentences translated. For more Talk Like A Pirate Day info, there’s also the The Official British Headquarters for International Talk Like A Pirate Day as well. They also have provided a poster to alert your co-workers to the precense of pirates in the area.

And also, to add the most fun to the day, make absolutely sure that you’ll be armed with all the jokes. Click below to get on the action. And after that, they keep on coming

END_OF_DOCUMENT_TOKEN_TO_BE_REPLACED

Get on down…. its Stealth Disco!!!

11. Killing the pop-up
10. Hoping the webcam is off
9. Recalibrating the joystick
8. Reallocating the DNA
7. Inserting a card into the HAND bus
6. Banging the space bar
5. Performing diagnostics on the hard drive
4. Commanding the prompt
3. Meeting Mr. Stickykeys
2. Cleaning the lightsaber
1. Lefthanded mousing

Real Ultimate Power!!! Read what it like to have the “Real Ultimate Power” of being a ninja. Check out this awesome flash animate. Love the music. You’ve gotta turn it up loud to appreciate the full quality of the audio. Do you like pirate jokes such as:

“Have you heard about the new pirate movie? It’s rated AARRRRGGH!”

Well watch out. Think I’ll be collecting some more jokes for my site soon! Also make sure you check out leprechauns darts. Fun!!!