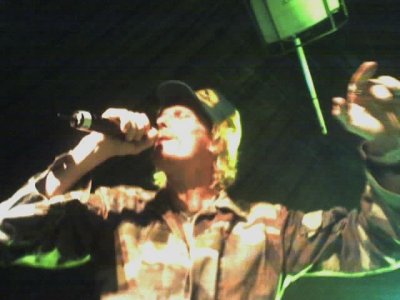 As part of the Becks Festival Bar (which is part of the Sydney Festival) the Stereo MCs performed on Sunday night with local lads Hermitude supported along with Simon Caldwell playing his usually choice selection. Since Rozie always likes to stand up the front of parties, bands, concerts, etc I decided to join her. Now this would have to be the closest I’ve ever been at a show. Front and center. I pretty much had Rob B dripping sweat all over me and his crotch was probably less than a foot away from my face. A bit too much info. It was a solid show with it mostly consisting of their favourites such as Elevate My Mind, Ground Level, Deep Down And Dirty and Connected. Actually, the show pretty much consisted of all the tracks off their Retroactive release from 2003.

In the coming weeks, there’s some great stuff coming up for the Festival though. I’ll be catching Recloose (live), Fourtet, Jamie Liddell and Saul Williams. If you’re in Sydney, get into it!