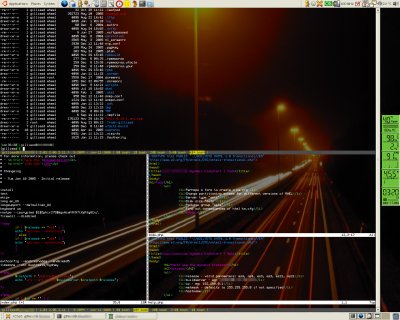 Nicholas was hassling me upload this screenshot, so here it is. On my IBM ThinkPad T41 at work, I’m running the OpenBox window manager in Ubuntu 5.10 Breezy Badger. In this session, gnome-terminal (with decorations removed) is ssh’ed into a server, with a split gnu screen session (my current .screenrc), with one of the screen sessions running vim with three split windows. I’m working on a php script which creates dynamic kickstart files for Redhat Enterprise Linux installs.